A Verse of Three block 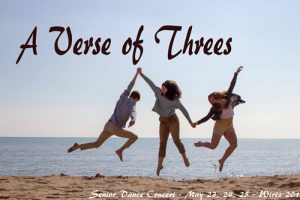 A VERSE OF THREES is an evening-length dance work exploring dreamscapes, relationships, and identity within transition. The performance features collaborative choreography from senior dance majors Thomas Boyer, Rachel Hughes, and Marielle Issa and will be the first Senior Dance Concert presented as one cohesive set of worlds. The performance will also showcase their dancing in a work by professional guest choreographer and Artistic Director of The Seldoms, Carrie Hanson.

Carrie Hanson is a dance artist and educator.  Since founding The Seldoms in 2001, she has created over twenty-five new works for the company.  She was named the Chicago Tribune’s “Chicagoan of the Year in Dance” in 2015. Her dance theater work, Power Goes, was awarded a New England Foundation for the Arts National Dance Project award and a National Performance Network Creation Fund. Ms. Hanson has been commissioned by the National Theater of Mannheim, Germany, the Elena Slobodchikova Dance Company in Russia, WCdance of Taiwan, and the Morton Arboretum. Time Out Chicago calls her “a virtuoso of meticulous composition” who makes “clear-edged, challenging dances”. She has designed major multidisciplinary projects with practitioners working in visual arts, music/sound design, fashion design and architecture. Under her direction, The Seldoms has gained a reputation for bold performance in unusual spaces such as cargo containers and truck depots. More recently, her interest in pressing dance to speak to problems of the day, such as the economy, the environment, and power in politics have led to dance theater works noted for their humor and humanity. Ms. Hanson was named one of “25 to Watch” in 2012 by Dance Magazine. She was a Chicago Dancemaker’s Forum Lab Artist, has twice been awarded an Illinois Arts Council Choreographic Fellowship, and received a Ruth Page Award for Performance. She has been named by New City magazine as one of “The Players: 50 People Who Really Perform for Chicago” three times. Ms. Hanson is Adjunct Faculty at The Dance Center of Columbia College Chicago and conducts residencies at university dance programs, most recently at National Taiwan University of the Arts and the University of Wisconsin/Madison. She is certified in Laban Movement Analysis and earned a BFA from Texas Christian University and an MA in Dance Studies from Laban London.