Set in the 1590s, brothers Nick and Nigel Bottom are desperate to write a hit play but are stuck in the shadow of that Renaissance rockstar known as “The Bard.” When a local soothsayer foretells that the future of theater involves singing, dancing, and acting simultaneously, Nick and Nigel set out to write the world’s very first musical. But amidst the scandalous excitement of the opening night, the Bottom Brothers realize that reaching the top means being true to thine own self…and all that jazz. 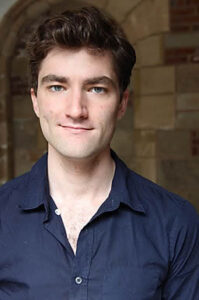 Rory Pelsue is a director of new and classic plays, operas, musicals, and live-stream performances. He is best known for directing the live-stream productions of This American Wife and Pulitzer Prize Finalist and Drama League Nominee Circle Jerk with Fake Friends, where he serves as Resident Director.

Recent and upcoming credits include the world premieres of Read to Me at Portland Stage, The Show on the Roof at Boise Contemporary Theater, and Deathbed Edition at Ars Nova ANT Fest; workshops of Circle Jerk at Ars Nova Makers Lab and Alumni Relations at South Coast Repertory Theater; Something Rotten at Northwestern University; and working on Agrippina, Porgy and Bess, Turandot, and The Rakes Progress at the Metropolitan Opera.

Originally from Newburyport, Massachusetts, Rory received his MFA in directing from the Yale School of Drama, where he received the Julian Milton Kaufman Memorial Prize for directing. At Yale, Rory directed Passion, Tent Revival, Othello, Bluebeard’s Wife, The Apple Tree, And Tell Sad Stories of the Death of Queens, Antony + Cleopatra and Mies Julie.

The Wirtz Center for the Performing Arts appreciates funding from The Alumnae of Northwestern University’s Academic Enrichment Grant.